Strategy: So far, we've decided to concentrate on getting all the balls over the wall. However, we do have some other potential strategies about scoring in the goals that might be considered as well.

Software Design: There will be several Java classes which will compose our robot's software. There will be a class which will process the optical as well as other sensor data from the cameras and sensors which will give the robot a sense of its surroundings. It will "tell" the robot the distance to the surrounding walls as well as the balls in sight. A control class will communicate with a driving class to decide the robot's movements based on what the sensors and camera detect. The robot will pick up balls and then decide what color the ball is and whether it should score it or keep it. There will also be a timer running which will control the strategy our robot will use (which varies with time).

Mechanical Outline: Our robot will have three levels. The first level will be the entrance for the balls which will be collected using a motor turning a horizontal spindle of rubber bands mounted across the front of the robot. The balls will be pushed by this spindle onto a very short and low ramp after which the balls will roll into a channel that will lead the balls to a conveyor belt. This conveyor belt will be housed in a vertical half-pipe which will drop the balls onto the third level of our robot. This third level is essentially a box with no top which is inclined so that balls tend to roll to the front part of the robot. The very front edge of the third level of the robot will have a door like that of a pickup truck which lays flat to let out all of the balls that were collected. We want to keep the battery on the lowest level of the robot so that we can keep our center of mass closer to the ground. The camera, computer will be attached to the second level. 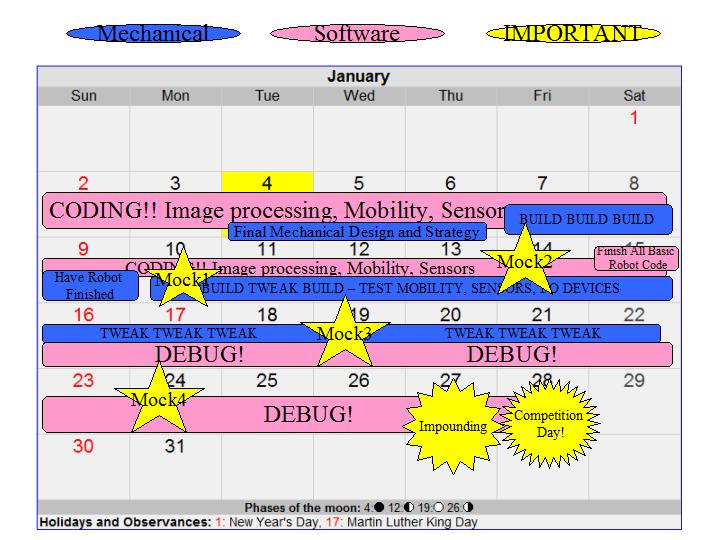